Romeo and juliet. and action.

ROMEO AND JULIET. AND ACTION is an interactive in-person theatre experience unlike any other: where students perform Shakespeare’s most famous play about love and family feuds alongside professional actors.

This play is the second instalment of our AND ACTION Series which saw us tour MACBETH AND ACTION to schools across the GTA in 2018.   Have your students learn Shakespeare’s play by performing it alongside actor-guides!

As companion to RJA, we are offering our PAN education program, led by a professional actor educator focusing on Shakespeare’s most famous play about forbidden love.

Schools that sign up to this program will benefit from three 75 minute classroom workshops for each participating class, led by a professional actor-educator focusing on one Shakespeare play. When we piloted the PAN in 2019, participating teachers indicated that these interactive workshops made a measurable impact on presentation skills, literacy, self-expression and teamwork in their classroom. 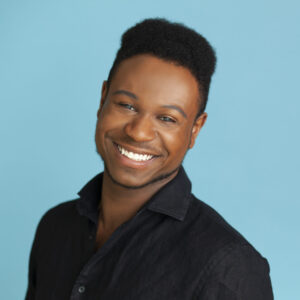 Jamar Adams-Thompson is a Jamaican-Canadian and Dora Award Winning actor and storyteller. He is a graduate of the acting program at the University of Windsor and holds a BFA Honours degree. Jamar is exuberant to be working with Shakespeare in Action and humbled to be bringing more heartfelt and captivating stories to the community. 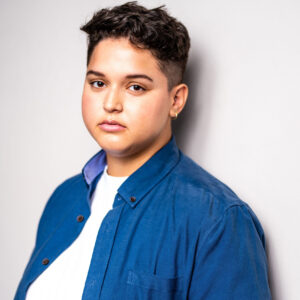 Frankie Bayley is a theatre artist based in Toronto who graduated from Queen’s University in 2020 with a BAH in Drama. They enjoy performance as well as stage management, most recently working as a Production Assistant for the Stratford Festival’s 2022 season. They are a collaborative artist who is interested in creating work that pushes the boundaries of what we now consider theatre. They particularly value theatre that gives space to marginalized voices, especially queer, trans, and BIPOC voices. They are very excited to work on this incredible piece with Shakespeare in Action–love and thanks to their amazing friends and family for all of their support! 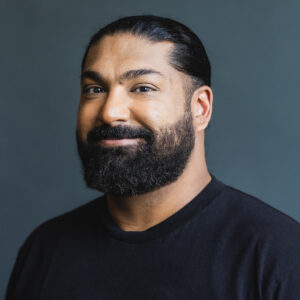 Gugun Deep Singh (he/him) is an actor, producer, advocate, and teaching artist working in film, television, and theatre. He received training at conservatories in Chicago and New York. Theatre: Danton’s Death (FringeNYC), Diary Of A Scoundrel (Circle In The Square), Back Of The Throat (Pasadena Playhouse), Metamorphoses (Athena), The Tempest (Santa Monica Rep), Much Ado About Nothing (Tarragon), The Men In White (Factory), Risk Everything (Red Sandcastle), The Winter’s Tale (Dandelion). Film: Looking For Comedy In The Muslim World, How To Plan An Orgy In A Small Town, The Journey Is The Destination, The Kindness Of Strangers, The Scrapper, Stealing Vows, Calorie. Television: Nikita, Odd Squad, The Expanse, The Strain, Nurses, The Detectives, Transplant, Blue Bloods. 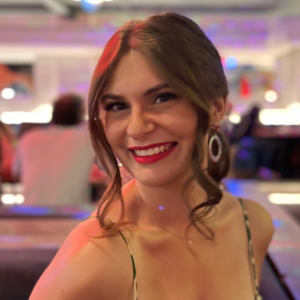 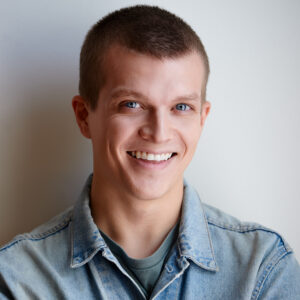 Curtis is an actor and theatre artist based in Toronto. Theatre credits include The Drawer Boy (Hudson Village Theatre), Reaching for Starlight (Geordie Theatre) and his self-produced mask show, Maskulin(e). On-screen and voice-over credits include (The Bold Type, Freeform), Star Trek: Strange New Worlds (CBS), Assassins Creed: Valhalla (Ubisoft). Curtis is a 2016 graduate of Concordia University’s BFA – Specialization in Theatre Performance. Curtis is thrilled to return to the stage with Shakespeare in Action after a short pandemic-induced theatre hiatus! Curtis also helped create the masks for Romeo and Juliet. And Action. 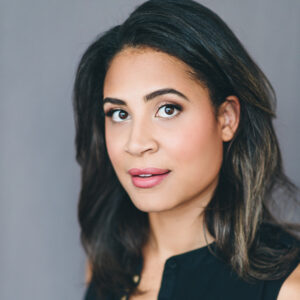 Beck Lloyd holds an MFA in Performance from York University and teaches acting, text and Shakespeare across Canada. She is a graduate of the Birmingham Conservatory for Classical Theatre and recently closed The Miser & Richard iii in her third season at the Stratford Festival. She moderated their much-watched Youtube panel, Black Like Me: Behind The Stratford Festival Curtain, and created, And Introducing…, a groundbreaking eight-episode series with Stratfest@Home. Beck also works closely with the Stratford Festival’s education department and creates Shakespeare educational outreach tools and curriculum for organizations including The Hamilton Public Library. In addition to acting and education, Beck has a recent and exciting publication in the Canadian Theatre Journal, and is thrilled to be back in Toronto assistant directing Romeo and Juliet. And Action with the brilliant Alex Montagnese and Shakespeare in Action this fall. 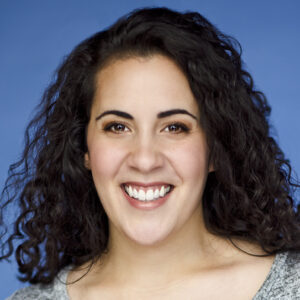 Andrea (she/her) is thrilled to be sharing this rendition of Romeo and Juliet with you! 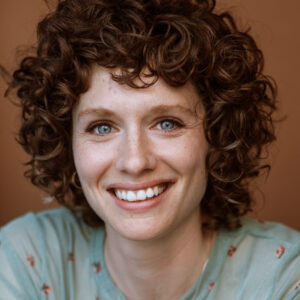 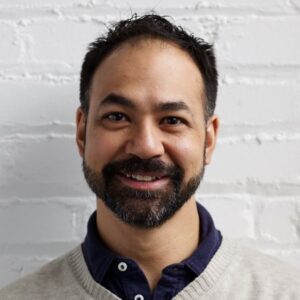 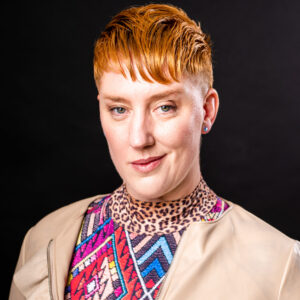 SUZANNE ROBERTS SMITH is a graduate of the National Theatre School of Canada & The Birmingham Conservatory for Classical Theatre and a critically acclaimed actor, director, theatre maker plus a passionate percussionist & artist educator who has worked across the country.

Over the past two decades in Tkaronto, Suzanne’s studied Traditional Afro Brasilian Percussion from Northeastern Brasil. She’s a lifelong learner of these rhythms, instruments and cultural expressions and a livelong listener of how to honour them and pay respect.

Suzanne’s central teacher, Juno nominated/singer-songwriter & master percussionist ,Aline Morales, bridges the source to Maracatu Nação Estrela Brilhante with rhythms from other Nations & Traditions. Suzanne’s creative partner and husband, Sérgio Xocolate of Maracatu Nação Camaleão, is Afro Indigenous Brasilian from Recife & Olinda. He generously shares teachings of his Jurema & Camdomblé cultures through his CABOCLO DE LANÇA lineage with key stories of cultural preservation from Pernambuco Brasil via traditional rhythms and his original music from his rock fusion band XOCÔ which Suzanne is also a member of.

Their theatre piece celebrating the life, times, queer mythology and culture of Maria Clara de Sena called: “ORIXÀS: Alive & Well & Living in TO”, was performed for the first time to an audience in September 2022 at Holy Trinity TO: https://vimeo.com/764439048/804b070230 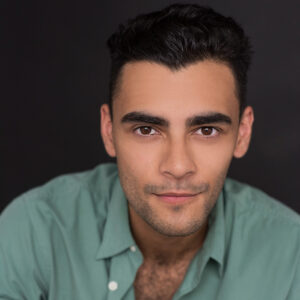 Deivan Steele (he/him) is a South African-Canadian actor, director, writer, and musician. As well as educating in classrooms with Shakespeare in Action, his previous work at the company includes 3Tempests and the development of The Book of Kit and Mel, a new family musical. His work has brought him to theatres like Tarragon (Behind the Moon), Theatre Direct & Eastern Front Theatre (The Assembly), Shakespeare by the Sea (Hamlet, Love’s Labour’s Lost, Henry V, Midsummer, Cinderelly, Wizard of Oz), Outside the March (programsound, Rainbow on Mars), Shakespeare BASH’d (King Lear, Tis Pity She’s a Whore), Driftwood (Froxeaglousey), Next Stage Festival (Bremen Town), Bad Hats (Princess Frownsalot), Unwrap Theatre (rihannaboi95), Bard in the Park (As You Like It, Midsummer), and Prague Shakespeare Company (Two Gentlemen of Verona). He is Neptune Theatre’s INKubator artist-in-residence, where he’s developing his newest play, Palany. 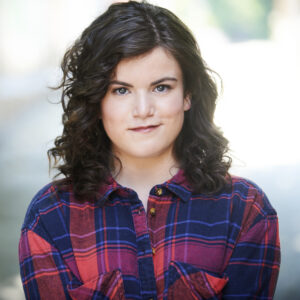 Arielle is a performing artist, theatre maker, educator and prospector of language. She graduated with a BFA in Acting from the University of Windsor, where she solidified her passion for classical text and ignited another for physical comedy. This led her to hungrily train in bouffon, mask and clown; illuminating her sense of play and intrigue with the performer-audience connection. Selected works include: Keeper in Worry Warts (Convergence Theatre/SummerWorks), Odysseus in The Penelopiad (Hart House), Co-Creator & Performer (with Neta J. Rose) of KINDERSPIEL, Exeter in Henry V (The Edge Productions). Arielle was one of Nightwood Theatre’s 2018/2019 Innovators and is grateful to Sweet Action Theatre Company for providing a place to fail gloriously. 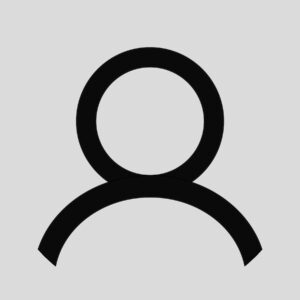